Although the centrosome was observed 143 years ago for the first time, there are still many open questions about its maturation cycle, protein composition and regulation. Most animal cells have one centrosome that functions as the main MTOC and a hub for many signaling pathways. The importance of controlling centrosome number is underscore during fertilization when only one gamete, the spermatozoid, provides the centrioles of the zygote, which will generate the first centrosome in the organism. This involves a conversion of the sperm basal body into a fully functional centrosome. This process is not well understood and could involve proteins associated to the basal body that we aimed at identifying through a mass spectrometry based proteomic approach. Even if the sperm basal body was initially described as devoid of pericentriolar material our analysis of the human sperm proteomes data showed that it contains a large number of centrosomal proteins. Moreover, we identified and partially characterized 3 novel centrosomal or basal body components that were previously reported as human uncharacterized proteins. They showed very different but also specific localization in the centrosome and basal body, suggesting that they have particular functions in these cellular structures. These data open the idea of studying centrosomal related protein in the human sperm cells may explain some of the failures during the fertilization and early embryo development. 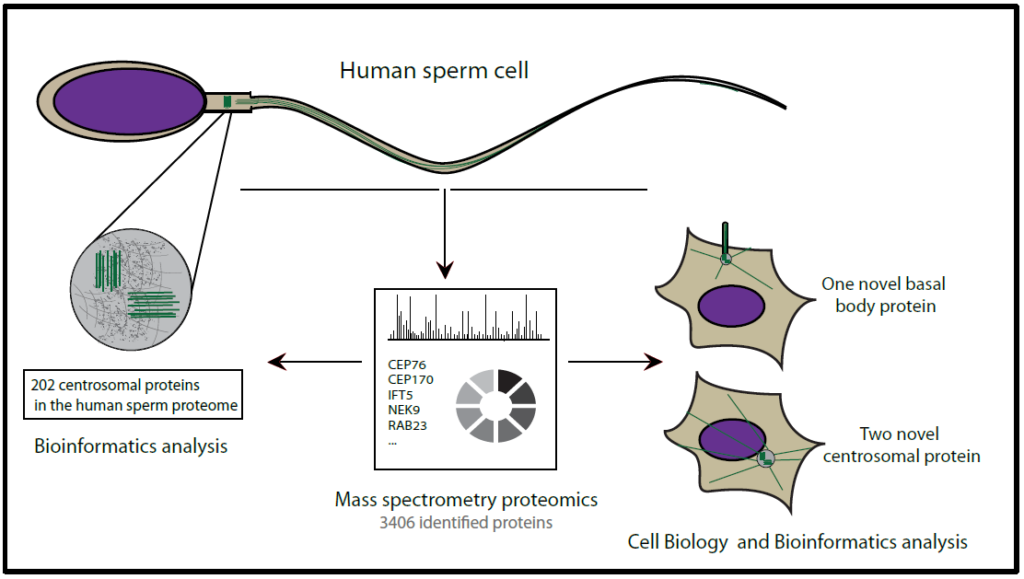